What Should Be Had

It is a "pleasant" and hot summer morning for Houtarou as he wakes up and goes downstairs to start his day. He is greeted by the running of a shower which whom he suspects is occupied by his sister, Tomoe Oreki, finally home from her travels. His suspicion was correct and he is offered a job at Tomoe's university as a lifeguard, in which she promises that he will do almost nothing. Oreki willingly accepts.

The Lost White "Earring" That Was On The Lady's Ear caseEdit

Eru, Satoshi and Mayaka come to the pool where Houtarou was working. After having some fun, Eru notices that a woman in a red swimsuit had something on her ear but later it is missing. Mayaka suggests that it was an earring or a stud that might have fallen off.

They come to the conclusion that if anyone accidentally steps on it they might get hurt. So the three of them ask Houtarou for his help. After searching for it almost everywhere, Houtarou realises something and asks Satoshi to hold Mayaka in his arms. Mayaka stars to go but then backs away saying it didn't matter who was holding her but because it was embarrassing as she would "look like a kid". Finally she agrees to do it if Eru holds her.

This proves Houtarou's theory that when you hold someone in your arms the person will most probably keep their hands on the holder's shoulders. It is revealed that the "white earring" was actually ice cream that the lady's son was eating. She didn't know it was there and it got washed away when she went swimming in the pool.

Satisfied, the three of them go home, leaving Houtatou behind to do his work. In the episode, Eru told Houtarou that he was special to her.

This episode is the first and last OVA of the Hyouka anime, and is considered as the eleventh-and-a-half episode. It was bundled with the third volume of the Hyouka manga. 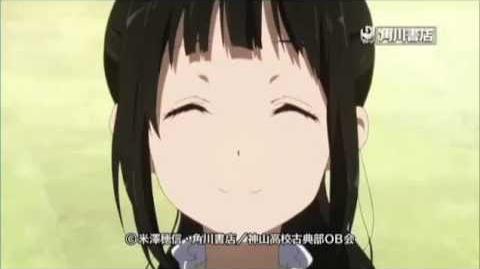 Add a photo to this gallery

This article is a stub. You can help Hyouka Wiki by expanding it.

Retrieved from "https://hyouka.fandom.com/wiki/What_Should_Be_Had?oldid=14767"
Community content is available under CC-BY-SA unless otherwise noted.