He seems fairly friendly. Despite being a good illustrator, he has no interest in drawing manga, only seeing it as something fun he did, showing a frivolous attitude toward it[1].

He did the art for "A Corpse by Evening" for the manga club during his first year, and is currently President of the Student Council. He seems to be admired by many female students.

In episode 15, he is seen watching the magic show with Jirou and saying hello to Fuyumi. Upon entering the room, two girls get excited and say "it's him!"

At the closing ceremony for the festival, after saying things at the festival safely came to an end. Muneyoshi mentions the "strange incident", the audience laughs. He then turns to a perturbed Jirō and says "Nice job!" and smiles. Jirou still looks a little disturbed.

They appear to be close friends.

They seem to be acquainted with one another. 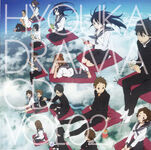 Add a photo to this gallery

Retrieved from "https://hyouka.fandom.com/wiki/Muneyoshi_Kugayama?oldid=14663"
Community content is available under CC-BY-SA unless otherwise noted.