"Let's Go to the Screening!"

Sarah Wiedenheft
Misaki Sawakiguchi (沢木口 美崎, Sawakiguchi Misaki) is a minor character of Hyouka. She is a second-year student of the Kamiyama High School and a member of the Astronomy Club.

Misaki has unruly raw-umber brown hair and golden eyes. Her hairstyle consists of three buns and one braid. She doesn't wear her uniform properly — she doesn't wear a necktie and has a bow in her hair.

Misaki is a cheerful girl with a good imagination. She tends to go overboard on some subject.

Misaki is one of the five girls who checked out the same book each consecutive Friday for their Art class. Hōtarō and company don't actually meet or see her at that time [1].

Misaki was the PR manager of Class 2-F independent film directed by Fuyumi Irisu. She was also one of the three people who were asked by Classics Club to solve the mystery of Hongou's unfinished script. However, her version was rejected by Houtarou Oreki [2].

Later, Hōtarō suspected Misaki and her club members of stealing Mayaka's hand made chocolate. He asked her, if she knew something about the theft. Misaki rejected the accusations of theft and got a little angry at Classics Club members [3]. 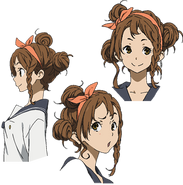