This page is about 2017 live action movie by Mari Asato. For other uses, see Hyouka (disambiguation).

Hyouka: Forbidden Secrets (氷菓, Hyōka) is an live action movie adaptation of the Classics Club novel series by Honobu Yonezawa. The movie is directed by Mari Asato. It was released in Japan on November 3, 2017 and distributed by Kadokawa Pictures.[1]

Hyouka is officially the first volume of the ongoing Classics Club mystery novel series by Honobu Yonezawa. After its release on 2001, an anime adaptation of the novel series, also entitled Hyouka, aired on 2012, as well as a manga adaptation in Kadokawa's Monthly Shonen Ace magazine.

Casting of roles for the live action movie began on April 6, 2016, where Mari Asato (Ju-On: Black Ghost, Bilocation, Real Onigokko 3-5) was announced as the movie's director and scriptwriter. On the same month, shooting commenced and lasted for ten more days.[2] Several months later, the movie is confirmed for launch and the lead roles of Houtarou Oreki and Eru Chitanda were revealed to be played by Kento Yamazaki and Alice Hirose respectively.[3] 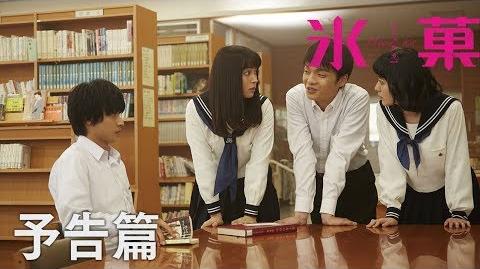 Retrieved from "https://hyouka.fandom.com/wiki/Hyouka:_Forbidden_Secrets?oldid=13816"
Community content is available under CC-BY-SA unless otherwise noted.