Even Though I'm Told I Now Have Wings

Even Though I'm Told I Now Have Wings (いまさら翼といわれても, Imasara Tsubasa to Iwaretemo) is the sixth book of the Classic Literature Club series, first announced in May 2016[1] and released on November 30, 2016.[2] Like the fourth volume of the series, this volume is a collection of previously unpublished short stories.

Before her solo performance in a Kamiyama City-sponsored choral festival, Eru Chitanda suddenly went missing. Mayaka Ibara and Satoshi Fukube look into Eru's situation before the start of the summer vacation and found a musical piece and a certain someone's lies——meanwhile, where exactly is the place where Houtarou Oreki confronts Eru alone? And what do her actions truly mean?

Even Though I'm Told I Now Have Wings

After the end of the final exams for Kamiyama High School, the members of the Classics Club began their typical banter during club activities. As Mayaka is starting to attempt making a manga story for the first time after leaving the Manga Research Club, she opened a conversation about having an experience with an "extremely sweet" cup of coffee one day. The conversation revealed some timidness to the typically curious Eru Chitanda, while Houtarou helped bring up the conclusion about Mayaka's lapse of memory during the sweet coffee incident. Houtarou did not reject a plan to confirm the story by visiting the cafe, but found that Satoshi and Eru will be unavailable for two different reasons: Satoshi will help the Student Council for the end-of-term ceremony, while Eru is revealed to take part in the upcoming Ejima Choir Festival. Houtarou knew that Satoshi will help organize their latest trip as material for their Hyouka anthology and decided to part ways for the day.

Houtarou's first day of summer vacation is quickly interrupted by Mayaka calling to ask help in finding Eru, who had suddenly gone missing. After narrowing down the places to look for, Houtarou decided to head to the cultural center in Kamiyama City, the venue for the Ejima Choir Festival. Here, Mayaka informed Houtarou that Eru is not only a mere participant, but also has a solo piece assigned to her, which now adds to the urgency of the situation. As the Kamiyama Mixed Chorus' "manager" Ms. Danbayashi checked up on Eru's status, an elderly woman named Atsuko Yokote, remained patient, and the latter engaged in a conversation with Houtarou as Mayaka began looking around again. Yokote later assured Houtarou that Eru is simply "getting some fresh air".

Mayaka soon returned with good news about Satoshi helping with the search. However, Houtarou instead requested for a route map of the city from Kamiyama Station. After reading a copy the event's pamphlet to kill time, he tried to investigate on his own. Satoshi arrived shortly, delivering the route map as Houtarou requested, and soon found out about Eru who is still missing, although Houtarou already had an idea of Eru's whereabouts. With less than two hours to go and forced to pull out over family-related affairs, Satoshi decided to leave the rest to Houtarou.

Upon returning to the waiting room for the Kamiyama Mixed Chorus, Houtarou assured Ms. Danbayashi about Eru's situation; in turn, he asked for the exact line that Eru is assigned to sing for her solo. As soon as Ms. Danbayashi left to bring the good news, Atsuko confronted Houtarou for lying about finding Eru. But, Houtarou fought back by deflecting the accusation of lying to Atsuko, telling that her statements regarding Eru coming back are false based on the timetable for bus routes in Kamiyama City and the rules in the cultural center. Atsuko eventually admitted her lie, and revealed that Eru never left Jinde this whole time. In turn, Houtarou voiced his resolve to bring Eru to the event as a friend; seeing this, Atsuko told Houtarou to head to the South Jinde bus stop, where a pale-faced Eru disembarked a bus in a hurry.

By some stroke of luck, Houtarou embarked on a bus heading to Jinde. With time slowly winding down, Houtarou fought the tension while thinking about Atsuko calling Eru "the Chitandas' daughter" and "the successor to the Chitanda estate" among others despite being her aunt, all while fighting his tendency to get carsick. Houtarou later managed to arrive at South Jinde, but had to rush as rain suddenly poured at that moment.

As Atsuko explained, Eru was inside one of the storehouses the Yokote family had used, and was trying to practice her voice, although she is also self-derisive of herself for not attending the event on time. In turn, Houtarou explained that he somehow understood Eru's current situation. Early on, Eru had been groomed to succeed the Chitanda family, but she had been recently freed of this role in the family, and is now unsure about the path she wanted to take, something that the lines of her solo piece was reminding her in a twisted irony. Soon, Eru spoke to confirm his deductions. Then, Eru asked about what to do with the freedom that was unexpectedly granted to her. Houtarou was unable to answer. 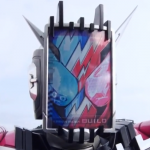